On 27 April, the Netherlands celebrated its famous Koningsdag or ‘King’s Day’. Technically, this day commemorates the birth of the King of the Netherlands, however, in reality it is a day where the nation comes together to display Dutch pride.

On the eve of King’s Day, I had my first International Law and Women lecture (which went really well!) but I would be lying if I said I wasn’t eager for class to finish so I could commence that vital search for anything orange. After class, I cycled into Utrecht city in search of orange clothing –which I must say is a difficult task indeed! Two hours later I managed to find an orange top which I snatched up before cycling to De Uithof (the area where my student accommodation is). That night was the so-called ‘King’s Night’ and there were various parties around the city. I, along with a group of friends, attended a party with exchange students and we subsequently delved into Utrecht’s nightlife in the city centre. Never seeing the centre so busy, this was only a taste of what was to come in the next 24 hours. 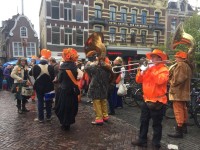 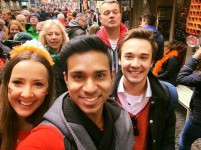 The next morning, I changed into my orange, put a Dutch flag in my hand (and later on, two on my face!) and a few friends and I cycled once again into the city centre. There was a party on every street corner and stages with performances throughout the city. The canals were lined with orange and music penetrated every alley. It was fantastic to see the whole nation out and about being proud of their country, their way of life and all that they have achieved. While Australia is always in my heart, it was clear the Netherlands was on my mind today more than ever.

A few friends and I had arranged tickets to ‘Kingshouse’, a music festival during the afternoon on King’s Day. We cycled (as you do everywhere in the Netherlands) over to the venue and were met with a massive crowd. There were two stages with artists playing simultaneously and the line up did not disappoint. While the weather also celebrated in true Dutch style –there had to be splashes of rain of course– the presence of both an indoor and outdoor stage was exceptionally convenient. My friends and I stayed at Kingshouse for around 6 hours, before a craving for Dutch friet met mayo (hot chips with mayonnaise) saw us retreat to the food stalls –a very Dutch way to end a very Dutch day!