I spent election day somewhere between hopeful and terrified, and I can honestly say I’ve never experienced anything quite like it. My one class of the day on Tuesday was, fittingly, ‘American Elections’. We’ve spent the whole semester learning about the electoral college system, primaries, partisanship, gerrymandering, and all the intricacies (and eccentricities) of the US election process. We have studied the polls and the models behind them, the campaign strategies of both candidates and their efficacy, however what we never once seriously considered, perhaps naively, was a Trump victory.

After class, a friend and I went to visit the grave of Susan B. Anthony, one of America’s foremost suffragettes. People, young and old, had been flocking to the Mount Hope Cemetery since polls opened to place their ‘I Voted’ stickers on the headstone, and show their appreciation for her courageous and revolutionary achievements. Admittedly, we didn’t brave the over two-hour long queue to have a photo and place stickers, however we were both so moved by the experience. As young women, it was inspiring to see older women weep with pride and see so many young families there, not just in support of Clinton, but showing their support for women everywhere. In listening to my American friends, I can feel how overwhelming and empowering it must have been to vote for a female president and stand up to misogynistic rhetoric, but America clearly wasn’t ready.

Election night itself was spent flicking between different polls and news coverage, with some feeble attempts at finishing readings and assignments made (read: no work). As Clinton’s projected victory margin shrunk, and the possibility of a Trump presidency grew, so too did feelings of anxiety. Yes, many were celebrating across the country, but in our room, there were a lot of tears, a few nervous phone calls to parents, and a general feeling of being completely dumbfounded (and me checking the Qantas website to come home). We cried, and we felt so let down, but as a group of white girls on a very liberal, upstate New York college campus, our privilege is enormous. At a time like this, our energy needs to be focused on protecting those on the margins, those who have been attacked by Trump throughout this poisonous campaign, and making sure that we bind together in a period of such division. 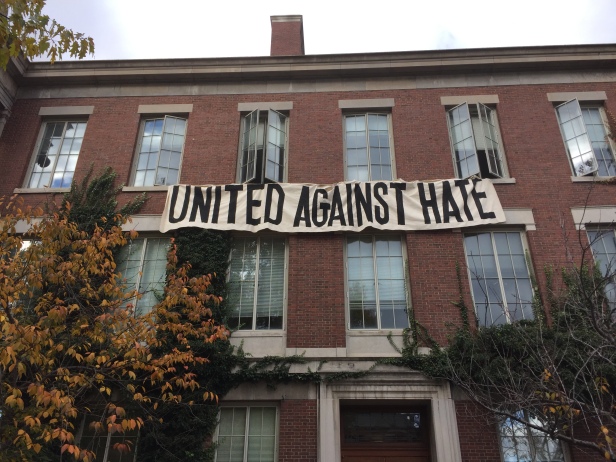 I had planned on writing about how the University is largely sheltered from the bigotry and hate that has been validated by the election result, however after the past couple of days, I can’t. In general, the mood on campus on Wednesday was sombre, with one professor aptly describing it as “funereal”. Having said that, we have not been immune. Pride flags have been burnt in Rochester, students supporting Trump have emerged from the woodwork, spouting hateful comments at other students, and a prominent professor has posted on the Facebook page of a student run event protesting Trump’s xenophobia, offering to pay for the bus tickets to Canada for anyone who says this isn’t their America, on the condition they promise to never return. Immigrant students in my class are fearing they won’t be able to return to college next year, women in hijabs are being reminded to “stay safe out there today”, and female students are concerned about their access to birth control and reproductive rights. This is so wrong and deeply disturbing. 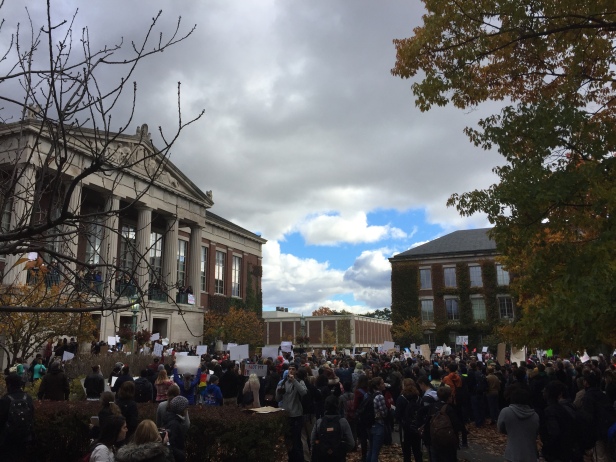 I think it is important to empathise with feelings of disenfranchisement, and try to understand the motivations of those who supported Trump. Trump supporters aren’t monolithic, and while I do believe that any support for him is tacit approval of his racist, sexist, xenophobic rhetoric, Trump tapped into key demographics that felt left behind under the Obama administration, and his victory is indicative of the entrenchment of class in the US. However, not for one minute should the hatred and vitriol directed at women and minorities as a result of Trump’s presidency be excused or tolerated. There is a difference between following Obama’s lead and giving the President-elect a chance, and using his election as a mandate to carry out his racist and sexist proclamations. That xenophobia won is truly terrifying, and I only hope that Australia heeds caution from this, and that we too don’t continue down the path of division and isolation.