Bandung, also known as the ‘Paris of Java’, is the third largest city in Indonesia. Located in the mountains with beautiful architecture, a cooler climate and just a few hours south of Jakarta, this city is a popular tourist destination. Early last year I was lucky enough to receive a New Colombo Plan grant to study with the ACICIS program at Parahyangan Catholic University in Bandung. Through studying in-country I’ve obviously gained insights into the culture, language and politics of Indonesia which will be valuable in my future study and career path. But I also gained a few extra kilos: I basically just spent six months eating.

Look up Bandung food on Instagram and you will find hundreds of blogs solely devoted to the food of Bandung; and for good reason. If you want good warung (street stall) food; it’s everywhere. If you want good-quality Western food; there’s countless restaurants where the chefs have trained overseas. If you want coffee; there are professional baristas. If you want food from anywhere else in Asia; it’s just an angkot ride away. If you want to try new foods you never thought existed, Bandung is constantly inventing more. Basically, I thought I would spend six months studying, but instead I spent six months trying to recover from food comas.

So here’s the best of the best. The five reasons why you should study in Bandung.

Reason 1: Brunch I have to start with the best meal of the day: brunch. While a typical Indonesia breakfast is rice-based, Bandung is home to many cafes that specialise in good-quality coffee and Western-style brunch. Both of the pictured dishes come from the café Two Hands Full. On the left, toasted sourdough bread with poached eggs, a smashed avocado and fresh lemon. On the right, toasted sourdough bread with cream cheese, smoked salmon, beetroot relish and fresh salad. Similar to other cafes in Bandung, their coffee is also something impressive because baristas are professionally trained and real milk is used. I used the excuse ‘it’s a good study spot’ to justify coming here so much, but in reality I just wanted to try everything on the menu. And the best part? Usually a substantial meal plus a coffee costs less than $10. 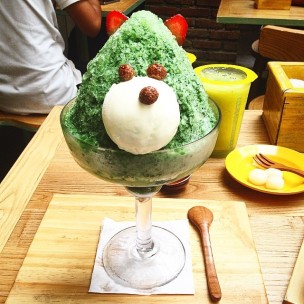 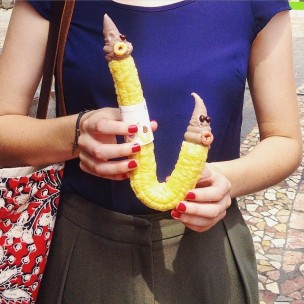 Reason 2: Dessert If you’re after Instagram-worthy desserts, Bandung’s got it. Pictured on the left is a green tea-flavoured shaved ice bear (that took two people to finish) and on the right a Korean ice-cream called Jeju. The malls around Bandung are filled with quirky snacks from around Asia. And like all other good things in Bandung, these treasures are usually only advertised on Instagram.

Reason 3: Burgers Bandung Instagrammers love their burgers. And as a new convert to Instagram who lived in Bandung, I had to get on trend. With such a wide variety of options, it wasn’t hard to see why everyone loves them. For example this charcoal-flavoured black burger bun is from a food truck called Burger Rocks. The bun is toasted then filled with a beef patty, egg, cheese and beef bacon. The other burger is a soft bun with deep-fried soft shell crab, mayonnaise, tomato relish and fresh lettuce with sweet potato chips on the side. This burger was from a famous Western-style restaurant, Miss Bee’s, which is sometimes so popular you have to wait for two hours to be seated. But with food this good, it’s definitely worth the wait.

Reason 4: Warungs Bandung also has many brilliant warung options. The famous gado-gado, a mixture of raw and cooked vegetables, tofu, steamed rice and peanut sauce, is everywhere. The one pictured on the right could be purchased on campus for less than $1. On the left is sapi bistik, deep fried beef, from Astana Anyar – apparently the best sapi bistik in Bandung. Other warung options include batagor, which incidentally was invented in Bandung, sate, nasi goreng, sambals from different areas of Indonesia and my personal favourite, green tea flavoured nasi goreng. These options, while less fun to Instagram, are the great things to try – often things get lost in translation or there simply is no translation. And because all university students eat at warungs, it’s a perfect way to make new friends.

Reason 5: Martabak The best reason to study in Bandung? Martabak manis, my all-time favourite food. Originally from Malaysia, murtabak is a deep fried savoury crepe-like thing filled with an egg, vegetable and chicken mixture. It was then adopted into Indonesian cuisine and called martabak telor. But after Bandung got hold of it, they invented a whole new concept: martabak manis. Best described as a large crumpet, the pieces are sandwiched together with butter and condensed milk, and then filled with chocolate, peanuts and cheese. While cheese and chocolate may not sound like a winning combination, trust me: Bandung knows how to do dessert. Pictured on the left is a martabak filled with sultanas, condensed milk and cheese. While on the right, from Martabak Andir (the best Martabak Warung in Bandung) is a red velvet batter with sultanas, cream cheese and Oreo. And for those who haven’t yet tried martabak manis, take note of the oil stained cardboard: if the box isn’t almost transparent with grease, the martabak isn’t worth eating.

Of course, I did more in Bandung than just eat: I studied interesting subjects, improved my language skills and made life-long friends. But I found that being aware of Bandung’s food-scene helped me be aware of Bandung’s culture. New restaurants, famous warungs or weird foods were a fantastic way to get to know people and bridge the cultural and language barrier. In fact many of my friendships were based on a similar love of food. So if you’re thinking about exchange in Indonesia, consider Bandung. And don’t worry, it’s also famous for its clothing outlets so you can buy a bigger pair of pants.